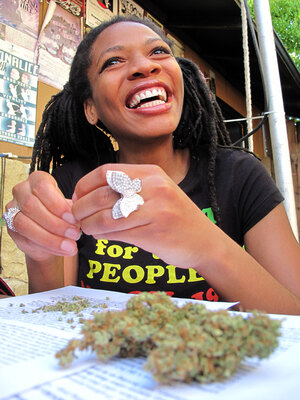 “They’re going to tax the hell out of me.”
“They’re taxing everybody they can, just because California is in debt.”
“They see the money can be made, like unbelievable taxation, enough to push me out of business.”

These aren’t your local Tea Partiers, these are quotes from pot smokers who oppose California’s Prop. 19, which would legalize recreational use of marijuana.  Their opposition stems from what they believe is California’s central goal: tax revenue.

Has it dawned on the stoners yet that they sound eerily similar to the millions of Californians — including the very rich — who have fled the Golden State due to high taxes and excessive regulations?

Between 2000 and 2008, California lost $26 billion in net adjusted gross income to all other states.  Of that, $11 billion was exported  just to Arizona and Nevada.

And it’s not just high taxes that have the stoners upset, it’s excessive regulations.  Dragonfly de la Luz (pictured above) says she’s against the initiative because it creates too many restrictions.  She says the limitation on the size of the area one can grow pot is insufficient.

“These exotic strains that we know and love are going to quickly become obsolete because a 5-by-5 space is just not enough space to breed and experiment all these new strains.”  Well.

Welcome to the real world, pot smokers.  If government’s intervention into your business is a bit much, you now know how the rest of us feel.