The Arizona Republican Party has decided to become the party of tax hikes. Yesterday, party Chairwoman Kelli Ward announced that the GOP is officially backing an amendment to the Arizona Constitution to impose a permanent $500 Million dollar sales tax increase for education. This is both bad policy and bad politics that will inflict irreparable harm on our state economy and sales tax code.

As the Club has chronicled for months, there has been a steady drumbeat at the legislature by political insiders to raise taxes for education. This is despite the fact that Arizona is enjoying incredible economic growth and record state revenues.

Since the economic boom began two years ago, state revenues have increased by $1.7 Billion. By comparison, from FY 2009 to FY 2017 state revenue grew by only $1.2 Billion. This rapid revenue growth wasn’t an accident—it is a result of pro-growth reforms by a new administration in Washington, Governor Doug Ducey and a conservative state legislature.

Thanks to the surge in tax receipts, Arizona is in the process of implementing the largest increase in K-12 spending in state history. Over a billion dollars has been injected into schools for teacher pay increases, district additional assistance restoration and new school construction.

Even with this large increase in education spending, Arizona will have nearly a $1 billion dollar surplus for FY 2020. It proves that the problem was a lack of taxpayers, not tax increases.

Amending Our Constitution to Raise Taxes?

Even if the State GOP believes that a tax hike is needed, the idea that it should be referred to the voters as a constitutional amendment is simply reckless.

If changes to our tax code are deemed necessary, the most sensible approach would be to approve a tax hike through the normal legislative process. Like our Federal Government, Arizona is a republic, which means taxing authority has been vested with the legislature. It is their responsibility to determine the appropriate levels of spending and taxation. Punting the issue to voters is nothing more than a way for politicians to avoid accountability for their actions.

But even if it was determined that the issue must go to the ballot, then it should be a statutory proposal similar to Proposition 301 that was approved nearly twenty years ago. Instead, they want to declare that the state government has a constitutional right to $500 million dollars in sales tax revenue.

Also unclear is whether the language has been vetted to ensure that it won’t lead to unintended consequences. Since this is a constitutional amendment, each word or syllable could face significant judicial scrutiny.

One such example is the provision to dedicate “twenty percent for maintaining an in-state tuition rate” at our state universities. The drafters of SCR 1001 probably thought this was a politically clever maneuver since voters like the idea of keeping in state tuition low (knowing full well that it is a meaningless mandate).

What is not considered is that “in-state” is not defined in the measure, meaning the courts could decide how this applies to various populations, such as illegal immigrants. The Free Enterprise Club does not have a position on the DACA issue, but it is unclear whether the Arizona GOP considered such issues when endorsing this proposal. Perhaps they trust that judges won’t expand the meaning of new language being written into our constitution.

What about the Polling?

A common response from the tax hike lobby is that voters overwhelmingly support higher taxes for education. Periodically an education group will trot out a poll showing support for a tax increase, which is then gleefully used by the political establishment to spook lawmakers into believing that they need to get on the “right side” of the issue.

It is true that most public opinion polls have voters saying they would be willing to pay more in taxes for education. But what about the only poll that matters, the one that occurs on election day when people actually vote? Are tax increases passing at the rate that the polling indicates? Let’s take a look:

As the evidence shows, when November rolls around and voters actually have to make a decision, support for tax increases is much lower than what the polling indicates.

Now that the AZ GOP has joined the tax hike chorus, it is difficult to know what the party will stand for heading into 2020. Two days ago the AZ GOP posted a tweet declaring that “Tax Cuts Work” and that Republicans believe taxpayers should be able to keep more of their money.  How they plan to reconcile their support for the Trump tax cuts while pushing for tax hikes on the Arizona ballot should make for some entertaining political gymnastics.

It will also be interesting to see how various GOP leaders respond to the new party platform. Governor Doug Ducey has been a consistent and vocal opponent to raising taxes, as well as a vast majority of the Republican legislature who know and understand how tax increases can derail our economic recovery. It is in their best interest to hold firm against this disastrous proposal so voters know that there are at least some elected officials that care about protecting their wallet.

The only reason the Republican Party exists is to help get people elected. By declaring they support SCR 1001, they are sending the message that the only way Republicans can win in 2020 is if they support a massive tax hike at the ballot. We wish them luck on their bold new strategy to try to tax Arizona into prosperity. 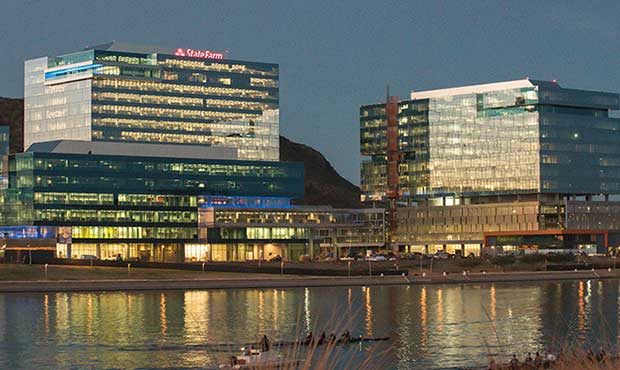 For months now, the AZ Attorney General Mark Brnovich and the Arizona Board of Regents (ABOR, the governing body for Arizona State University) have been in embroiled in a hot legal battle over taxpayer subsidies for wealthy developers.

At the center of the legal dispute is whether ABOR has violated several provisions of the Arizona constitution designed to protect taxpayers from crony capitalist giveaways.

Evidence suggests that they have.

The framers of Arizona’s constitution understood that property taxes are a zero-sum game, and that any levy assessed should be as fair and equitable as possible.  If someone pays less as a result of a special interest carve-out, everyone else will be forced to pay more.   To prevent picking winners and losers through the property tax code, the framers installed several key protections in our constitution:

Governmental entities, including public universities, do not pay property tax.  This makes sense as the money to pay the taxes would have to be taken from taxpayers in the form of more taxes.  But for decades now, local cities as well as ABOR have devised creative solutions to exploit their exemption from property taxes and “lend” it to private developers.

In the 1980’s ASU formed a “research park” which strived to have private business and students working alongside each other in educational pursuits to launch ideas into the marketplace.  This was permitted legislatively, and the university paid the same rate of taxation as other users in the same classification but on a mere 1 percent of their property value.  It soon became quite obvious that the mission of the research park was creeping beyond the original intent of the legislation and as a result, major corporations were enjoying major tax deference for what was their normal business operations.

Between the research parks of University of Arizona and ASU, they host approximately 50 companies in 4 million square feet.  These companies don’t pay property taxes but instead pay a “tariff” to the university as well as the city.  All the other jurisdictions, including the State of Arizona who rely on property taxes, get absolutely nothing.

Marina Heights is located on Tempe Town Lake and includes the well-known “State Farm” building.   In December 2017, with a deal that captured headlines in the state, the building’s “lease-back” was sold to a business partnership that includes Arizona icon and business insider Jerry Colangelo for almost $1 Billion – one of the largest commercial land transactions in state history.

One of the most valuable assets of the property was the value of not paying taxes.  In fact, that value is approximately $12.1 Million a year of which $3.45 would be owed to the State, $6.6 to the Tempe Elementary and Tempe Union school districts, and $1.2 million to the Maricopa Community College District.  Not only do these jurisdictions have to back fill their budgets and other property owners make up that difference, but other like businesses must try to compete with a colossal tax advantage.

Brnovich’s latest suit filed in January of this year centers around a project called Omni Hotel (located on Mill Ave and University) and predominantly argues the deal included a massive violation of the state constitution’s gift clause.

In typical ABOR fashion, the Omni Hotel transaction is a sweet deal for developers and less so for taxpayers as a whole.  ASU will spend $19.5 Million to construct a conference center and parking garage and pay $8 Million to the hotel for use of that parking garage to the profit of the hotel.  ASU will only be allowed use of the conference center 7 days out of the year.

It is a 60-year lease with an express provision of evading taxes by requiring a “in lieu of taxes” payment of $1 Million a year.  The hotel is only on the hook for $85 per square foot for rent even though within two blocks there are other hotels that sold for a market rate of $212 – 216 per square foot – a seemingly $9 Million subsidy.

This major injection of corporate welfare does not even account for the $21 Million in tax incentives being given by the City of Tempe.

Given the explicit intentions of the state constitution to protect the property tax base from chicanery of the system; ABOR’s long-standing history of using their tax-exempt status to shield corporate entities should not be ignored.  AG Brnovich is doing a service to every taxpayer in the state by calling for an end to this blatant illegal practice.

Afterall, ASU is also constitutionally bound to make tuition “as nearly free as possible.”  Year after year of tuition hikes on Arizona students are certainly hard to square with hundreds of millions of dollars in corporate giveaways.