Last year, under the guise of public safety, a bill was passed at the legislature to charge Arizona drivers an additional VLT (vehicle license tax) fee. Although it was purported as a dedicated funding source for Highway Safety Patrol, the money was immediately swept to support payment of the Governor’s 20×2020 teacher salary raise plan.

The fee was passed with all Democrats and a handful of Republicans, with conservative Republicans getting rolled on the bill.  Despite the claims that the fee would be $18, the bill gave unilateral authority to the Department of Transportation to set the tax, and when finally assessed the fee doubled at $32.

In the New Year, without ANY organized opposition, Arizonans all over the state started expressing their outrage to lawmakers about the tax.  Several legislators immediately filed bills to repeal and/or cap the fee.

Senator Michelle Ugenti-Rita (the main champion of the full repeal) sponsored Senate Bill 1001, which sailed out of the senate with a 24-6 vote.  Many of the lawmakers who supported the bill last year have now backtracked on their vote.

The bill was never given a full vote in the House as it got caught up in budget negotiations with the Governor’s office.

Unfortunately, taxpayers won’t being seeing a refund of that $32.  However, this is a tremendous win for legislators and taxpayers!  Not only were they successful in getting a tax eliminated that should have never been passed to begin with, but they are in the process of repealing some of the worst public policy to ever pass out of the legislature.

Getting Conform and Reform Right

As the Club has covered for over a year, Arizona taxpayers are facing the largest income tax increase in state history if a proper federal tax conformity plan is not adopted by the legislature. The department of revenue estimates that the conformity tax increase would be over $200 million dollars in the first year, with some estimates as high as $300 million.

The good news is that policymakers appear to be on the same page that any additional conformity revenues must be given back. This is a big win for taxpayers. What remains an open question is the manner in which the money is returned.

The second issue is just as important as the first.  Though a simple approach on stopping the tax hike (such as cutting all the tax rates) could be done, the Club has advocated that the conformity issue be used as an opportunity to reform and simplify our income tax code.

Reforming Arizona’s income tax code is long overdue, and if done right could be bring us closer to neighboring states Utah and Colorado with a simple flat income tax. If we can’t eliminate the tax, a simple/flatter system is the next best choice.

Unfortunately, most of the discussions related to conform and reform have been behind closed doors in budget meetings, with little input from the public. Though various components have been leaked, it has been extremely difficult to determine which proposals are best without reviewing the projected impact on taxpayers.

For example, adopting a reform model that cuts taxes for some taxpayers while raising taxes on others (picking winners and losers) would be suboptimal. The only way to figure this out is through modeling from the Department of Revenue.  Yet most of this data is only accessible to lawmakers and the executive branch; it leaves interested observers and stakeholders at a disadvantage on making an informed decision.

Without a front row seat to the debate or access to modeling, the Club has been seeking out a reform plan that both returns all of the money and holds taxpayers across all income ranges harmless.

Last week a conform a reform plan was released that appears to do the trick (The plan can be viewed by clicking HERE).

Why the 3-bracket plan? This is only plan so far released that will hold individual income taxpayers (which include small businesses) harmless across all income thresholds and stops multiple tax increases, saving taxpayers over $300 million per year. Other reform plans, though well intentioned, appear to shift taxes across income levels that would trigger a tax increase on thousands of Arizona families and small businesses.

As structured, the 3-bracket plan would provide taxpayers making $50k or less with a substantial income tax cut. Taxpayers in this income group would see their tax bill slashed by an average of 20 percent.

Finally, the 3-bracket solution would simplify our tax code while flattening out the brackets. Reducing the progressivity of our income tax code should be the cornerstone of any reform package.

As the legislature (hopefully) heads into the final stretch, it the Club’s hope that the 3-bracket plan is seriously considered and adopted as the conform and reform solution in the budget. 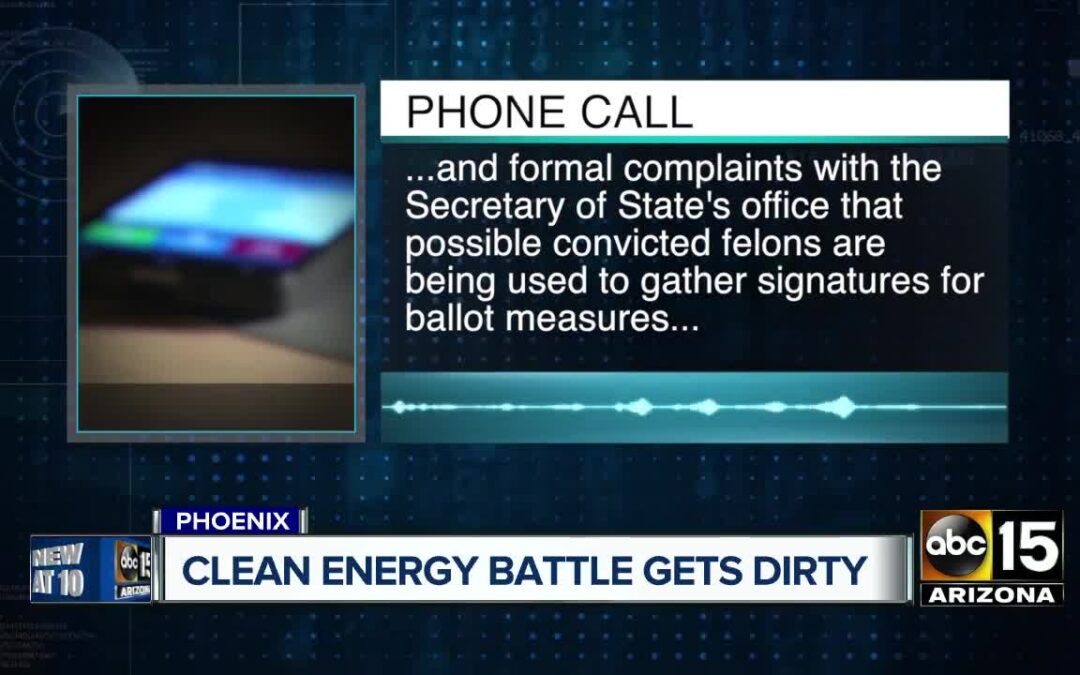 The Left and Media Ignore Initiative Fraud While Attacking SB 1451

There is an open secret regarding Arizona’s initiative process, one known by political insiders, ignored by the media and accepted by every group looking to buy their way onto the ballot box.  It is that committees that run ballot initiatives hire felons and fraudsters to collect signatures to qualify propositions for the ballot.

This statement is factually true and supported by evidence, yet is immediately denounced by liberal opponents and the media as a cynical attempt to thwart access to the ballot.

It is why when initiative reform measures are proposed such as Senate Bill 1451, no time is spent debating the actual provisions of the bill designed to crack down on the abuse. They fear this debate because it will expose the true intentions of their opposition. Instead, the howls of “voter suppression” get louder to avoid confronting these questions.

How bad is the abuse? In 2018, undeniable evidence was discovered that the “Outlaw Dirty Money” initiative hired several criminals to collect signatures on their behalf.  These individuals’ wrap sheets included offenses such as theft, assault, insurance fraud and robbery.

They would have gotten away with this scheme if not for an extensive review of the petitions by opponents of the measure. When the felons and fraudsters were discovered and challenged in court, 15 of the paid circulators working for the measure ignored the issued subpoenas and simply refused to show up in court.

This wasn’t the only initiative that employed shady or illegal practices.

In the case of Proposition 127, the committee’s own campaign manager admitted in court that most of their signatures were likely invalid.  Of the over 240,000 invalid signatures they submitted, over 20,000 of them were submitted by circulators with felony records.

It is for these reasons that Senator Vince Leach introduced Senate Bill 1451, to address these abuses of our initiative system.  SB1451 includes two significant reforms:

Yet one would never know just how necessary and reasonable these reforms are over the cries from opponents claiming this will end the initiative process.

The reality is this: groups looking to buy their way onto the ballot box have no desire to police their own people, they are okay with fraud in the initiative process, and they don’t believe there should be consequences when people are caught red handed committing fraud.

But outside of the echo-chamber of the state capitol, the average Arizonan disagrees.  Over 85 percent of Arizonans polled supported the exact type of anti-fraud provisions included in SB1451 – including prohibiting felons from collecting their personal information. 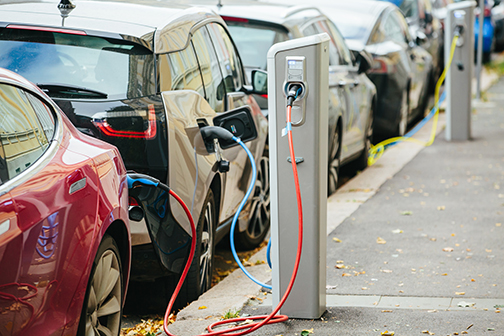 Corp Comm Charging Station Mandate is a Subsidy for the Rich

There has been an important policy debate stirring in Arizona over a proposal to mandate the construction of electric vehicle (EV) charging stations by utility companies.  The current proposed policy would benefit a few select companies and electric vehicle car owners at ratepayer expense.

Surprisingly, this conversation has not been happening in the transparency of the state Capitol amongst the state’s elected lawmakers – but by the Arizona Corporation Commission (ACC) – whose primary charge is to set utility rates.  This is inappropriate.

Voters expect policies of such sweeping state implication to be the purview of the Arizona State House and Senate, not the Corporation Commission.  After all, existing subsidies for electric vehicle owners such as the utilization of the HOV lane, significant reductions in the cost to register an electric vehicle, and an exemption on the first year for vehicle emissions testing are all statutory laws that went through the more public and rigorous legislative process.

Aside from the ACC being the wrong venue for this discussion, there are deep policy flaws with the proposal.

First, the evolution of new technology into the automotive and energy marketplace has been good for the economy, consumers and the environment. But building charging stations would inject another subsidy into the rate base that picks winners and losers among ratepayers.  Less than 1 percent of the population own and operate an electric vehicle, yet they will benefit from this program at the expense of the other 99 percent. Additionally, since most electric vehicle owners are overwhelmingly wealthy and affluent, this is a subsidy that will be paid for by the middle class to benefit the rich.

Secondly, as cited, electric vehicle car owners already receive favorable tax treatment and do not need an additional subsidy. Currently, the majority of Arizona’s transportation infrastructure is financed through vehicle fuel taxes. There is not a comparable EV tax, which is a great deal for adopters of the technology. If the Commission moves forward with subsidizing charging stations, internal combustion car owners would be getting hit at the pump as well as through their utility bills.

The ACC proposal is simply unfair.

Finally, this proposal would set a precedent for additional subsidies to preferred constituencies. For example, if we are to build charging stations for electric cars, why not for electric scooters or golf carts? Once the Commission begins handing out special deals to one class of ratepayers, it should expect others to get in line asking for their sweetheart deal as well.

The Club understands the desire of the Commission to promote new ideas and technology, but mandating the construction of EV charging stations is not the right approach.