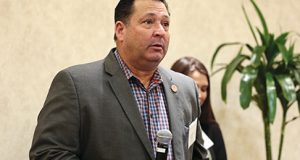 Infringing on the 2nd Amendment

View David Cook’s comments in House Republican caucus.  Cook argues that because foreign students attend our universities and are not familiar with our 2nd Amendment rights, that is a reason not to allow CCW holders carry weapons on campus.

Subsidies for the Swamp

Paid for by The Arizona Free Enterprise Club. Not authorized by any candidate or candidate campaign committee. 602-385-0757