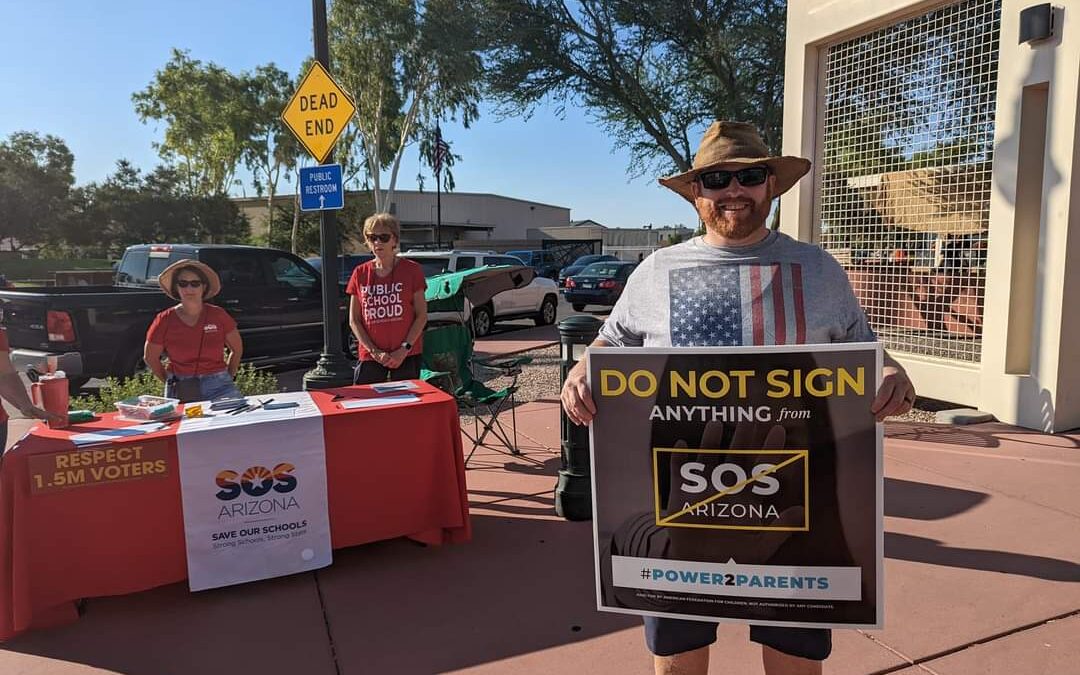 Save Our Schools Arizona is clearly frustrated in its mission to stop families from having the freedom of school choice. For a few months now, the group has been gathering signatures throughout Arizona for a ballot initiative aimed at overturning universal Empowerment Scholarship Accounts (ESA). You know…the law that was passed this summer to ensure every child gets the education they deserve. The one that even some Democrats and prominent black leaders like Pastor Drew Anderson fought for. The law that actually saves taxpayers money and was so popular that its launch overwhelmed the Arizona Department of Education’s website!

That’s what Save Our Schools is fighting against. And they likely thought their efforts to deceive the public about the nature of ESAs would go uncontested. But they were wrong.

Not long after Save Our Schools started its signature gathering, an organic movement of parents, teachers, and community organizers led by Christine Accurso hit the streets and social media to combat the lies peacefully. With basically no funding, the group—known as Decline to Sign Arizona—has met Save Our Schools at every turn to help every petition signer understand the truth about what they are signing. They stood on street corners in 110-degree weather. They alerted business owners when their private property was being used by Save Our Schools without permission to collect signatures. And they mobilized to have a presence anywhere Save Our Schools showed up—all in the name of protecting school choice.

While we should know by the end of this week if Save Our Schools has the 118,823 valid signatures to get on the ballot, it’s clear that the Decline to Sign movement has left them frustrated. Just look at this weekend’s Twitter meltdown from Save Our Schools director Beth Lewis. It has all the usual signs of a group in desperation:

If Save our Schools’ ballot initiative was worthwhile, you would think its director could avoid the name-calling and simply sell her viewpoint. But instead, she pulls from the Left’s predictable playbook to work the “Trump” name into her rant in a Hail Mary attempt to get some attention.

Maybe it will work this time. Maybe Save Our Schools will wind up with enough signatures to get on the ballot. But regardless of the outcome, the Decline to Sign movement has become the perfect illustration of how to fight back against the Left.

It doesn’t take millions of dollars spent on consultants, advertising, and politicians to do your bidding. You get on the ground, hit the streets, and fight. You make them squirm. You make passionate and reasoned arguments based on facts until they expose themselves by abandoning their talking points and resorting to name-calling.

This is how you beat the Left.

Right now, it’s for school choice, which, as Pastor Drew says, is the civil rights issue of our generation. But the battles won’t stop there. Even if conservatives control the legislature and the executive branch, the Left will keep fighting. That’s why it’s critical that the people are there to meet them at every turn. We can’t sit back on the sidelines and expect our elected leaders to do it all. It’s time for conservatives to step up. Thankfully, Decline to Sign Arizona has given us the playbook.